Dominic and I love our shop space so much and over the years we have made changes to accommodate our customer’s needs. This year’s work was way above and beyond anything we have done in the past. It was a complete re-build except we re-used most of the displays and gave them a fresh look with new paint and added a few details. I wanted to show ya’ll just how much work we completed in a very short time frame. Dominic works fast cuz when he is OCD about something, he wants to get it out of his brain as fast as he can.

The work started on New Year’s Day. Dominic did not want me in the shop that day. A lot of drilling and banging and building was going to be happening and he wanted to be alone (thanks to everyone who offered help, BTW, he works better alone, TRUST ME on that!).

He doesn’t like for me to paint cuz I am messy, so I just came in to get computer stuff done – we had a drivetrain install scheduled for the end of the week and the parts needed to be ordered. Dominic painted every wall, “electric lime”, and “exuberant pink”, even painting some of the walls we hadn’t planned on painting. Every bike was moved to one side of the shop, and everything else was being moved around so he could paint. 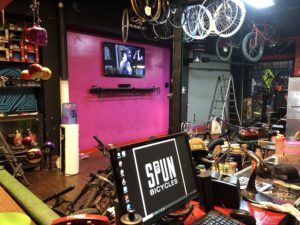 Dominic finished the walls and we moved the vinyl bar we got from our friend Victor in the space where the old BMX case was. Dominic hung his cheetah print curtains. Everything was complete and utter chaos. 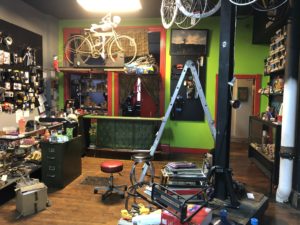 Friday was my day to get our groceries and typically I don’t work but Dominic was starting his wall art (which at this point I still didn’t understand exactly what he was going to do) and in the middle of that, the parts came in for our drivetrain repair which he got done pretty fast so he called me and asked me to come in and take care of the customer coming by to pick her bike up. I went out and brought him dinner that night and we sat on the floor of the dirty shop and ate together. I saw what he doing to the walls and knew he’d be there super late. 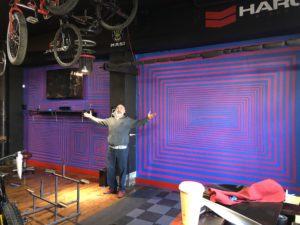 I came in to the shop and was blown away. He taped the walls until midnight the night before and he was so proud of his work. That day was rough. He had to paint the walls black and while he was doing that, I scrubbed down the tooling area. And that was 6 hours of scrubbing the tool cabinets, moving all the tools from bench to bench to scrub down every single area. He wanted to paint the cabinets and the benches and also polyurethane the tops. It was a nasty job.

We left Saturday evening and the walls looked like this: 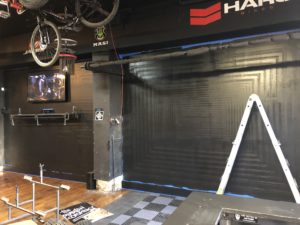 We were chilling on the couch at about 7:30pm when our buddy Erin informed us that if we left the blue tape on under the black paint overnight, the paint under the tape would peel off, so Dominic literally got off the couch and went back to the shop to take the tape off and and touch up the pink (he was there till midnight again) and then it looked like this: 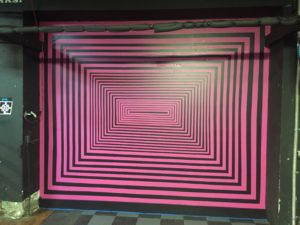 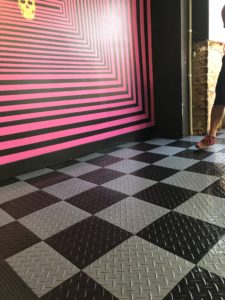 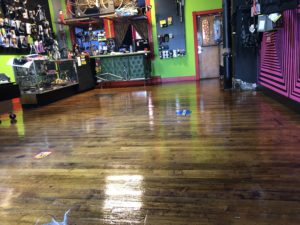 Dominic was in the shop starting to put his tooling area back together and installing new light fixtures. I ran errands for him most of the day and we met back at home that night and knew we were on the home stretch.

Putting it all back together. Dominic putting all his tools away. 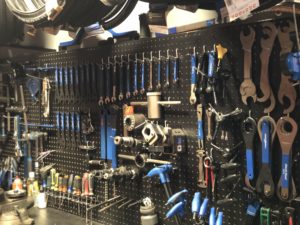 Dominic has always wanted a double repair stand and since he extended the tooling area by 6 feet he could finally fit one in! Now he can wrench on 3 bikes at a time! 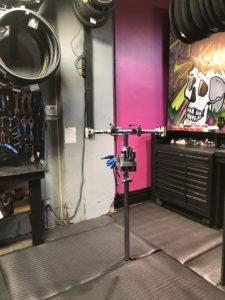 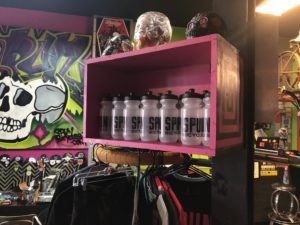 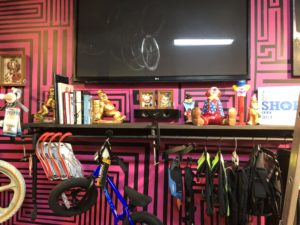 This case was old, from the 1960’s, and a few years ago we cracked the glass on the side and just taped a BMX banner over it. Dominic decided to fabricate a platform to actually put the case on caster wheels, capped off the sides with wooden panels, painted it and moved it to the back wall. 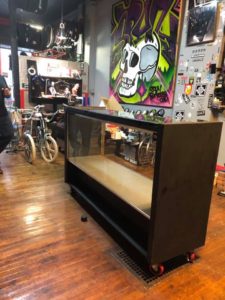 This will be the case where we keep spare repair parts. He built shelves for my helmets! 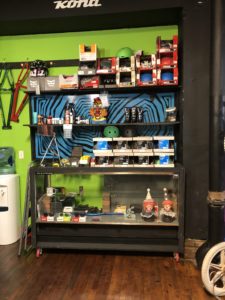 I cleaned out my office and Dominic continued to put stuff away. When we left that night we were both on cloud nine. He had the workshop of his dreams. Everything was exactly how he wanted it and he could not stop smiling. 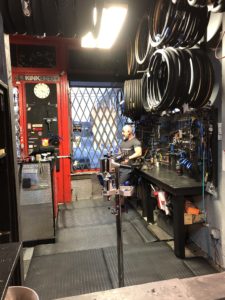 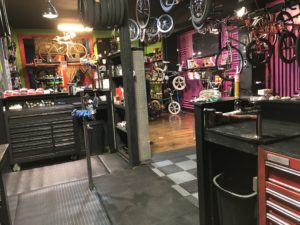 His wheel building lounge is perfect. He fabricated a light onto his truing stand and installed the Phil Wood Spoke Machine onto the table. I bought him a vintage rolling stool with a back so he can sit and cut spokes and lace wheels and people can sit on the skateboard bench opposite of him and chill out. 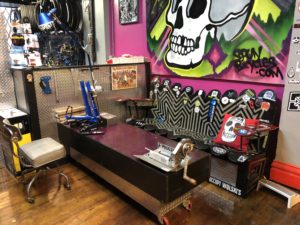 Hanging up our pictures, installing a rad phone in the tooling area and just so damn happy with the results. 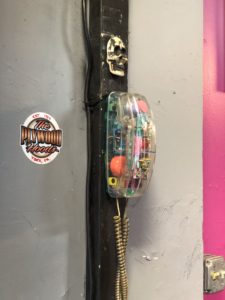 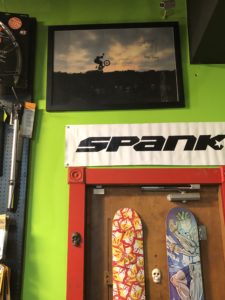 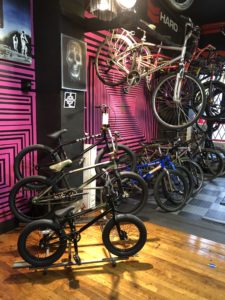 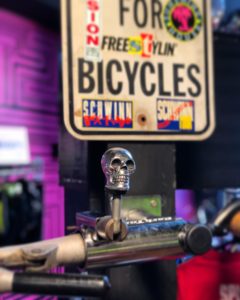 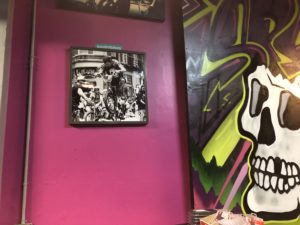 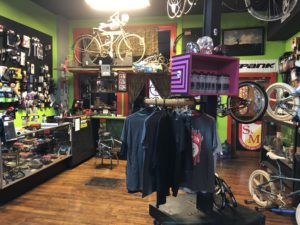 The cases were consolidated and we are using just one now. The vinyl bar is Dominic’s consult area where he has his own computer and all of his books and catalogues are on the shelves behind the bar. 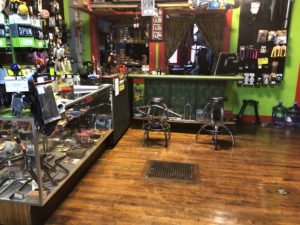 And that’s that! We hope you love the space as much as we do. Thanks so much for your patience; we can’t wait to get back to work on Tuesday.