On August 18th, I had an hour to ride my bike before work. I have a little route I like to do that takes me from Price Hill across the 3rd street bridge through Covington to Newport and back across the Purple bridge to the new bike lanes on Central. That particular morning I was stopped at the light at York and 5th in Newport when a car behind me started honking incessantly. I turned around to see a black Mercedes inching his way closer and closer to my back wheel, all the while honking his horn. Finally his front bumper was touching my back wheel and I had to lean the bike down and by then my rear wheel was under his bumper.

Long story short, the 78 year old man was charged with Menacing and Wanton Endangerment. He had a clean record and is now in Newport’s Diversion Program. I hope he thinks of me every time he sees a bicyclist and keeps his anger in check. In all the years I have been riding a bike in the city, I have NEVER had an incident like this. Cut off, yes. Yelled at, sure. Never ever did anyone try to cause me physical harm on purpose. So I followed through to make sure this guy did not get away with that shit.

On with my rant, which is my intention for this post.

So, Morgan got hit again last night, riding in the bike lanes on Central at the Western Hills Viaduct. On Facebook she posted:

“Riding in the bike lane on Central Parkway, going straight through a green light at the Western Hills Viaduct. Someone driving in the right hand lane with no signal on turned right in front of/into me. Driver stopped, said he hadn’t seen me, and didn’t even realize he’d been involved when he first heard the noise of the accident, only once he saw me on the ground behind him.”

Needless to say, I was stunned. No wait. I was MAD. Like, explosive anger.

Thankfully this time around she was not hurt badly. She’s spooked, yea, her two dozen eggs got smashed in her pannier, her fenders are rubbing which is an easy fix and Dominic will assess the bike to see if there if there is any other damage.

The guy pulled over and apologized, offered her and her new bike a ride home, and told her “I didn’t see you”. Ya know, that really doesn’t help the situation. WHY did he not see her? It was light out. She was in a bike lane. She was a PHYSICAL BEING in the road. Was he on his cell phone? Was he just not paying attention? And why did he NOT use his turn signal?

So now my rage is ON and I sent a text to Mel McVay who works for the City of Cincinnati’s Bike Program. I told her about Morgan’s incident and hooked the two of them up so an incident report could be filed. The city is supposed to install YIELD signs – both bicyclists and motorists are supposed to yield to each other.

I think most people feel like they’re invincible if they are riding in a bike lane. WE ARE NOT. Bike lanes are supposed to make you feel safer and the city installed them in the hopes that more people would feel safe enough to ride bikes here and that is happening!

My words of advice are as follows:

-Pretend you are invisible. Assume the cars can’t see you and tap the brakes or stop when in the flow of traffic. Yea, it sucks, but is your life worth making it through that red light?

-While riding your bike in a bike lane (or not), be aware of the traffic around you. If you see a car about to turn – from ANY direction – assume they will cut you off. Tap your brakes and make eye contact. Make them see you as a human being rather than an obstacle in their way.

-Communicate with traffic by using hand signals. I just point to where I am going and make sure all the cars know if I am turning right or left or if I need to get over in the next lane to turn. This is KEY. They can’t read your mind.

-Light yourself up! Make yourself seen. It’s the law anyways. You have to have front and rear lights if you are riding at night (or in the morning before the sun comes up). Wear a freaking neon vest if you have to. It might save your life one day.

–Know your rights. And when you do get into an accident, please follow these steps, and thank you to Queen City Bike for having this info out there for us.

-PUT YOUR PHONE DOWN AND FOCUS! Be attentive to bicyclists and pedestrians whether they are in a bike lane or a crosswalk!

-USE YOUR TURN SIGNALS! How are people supposed to know you want to turn if you don’t use your freakin’ turn signal? It’s SO simple.

-GIVE US THREE FEET! You speeding down the street to get to the red light as fast as you can and coming within an inch of me IS NOT COOL.

-DO NOT TELL ME TO RIDE ON THE SIDEWALK! I have the same rights as YOU do.

To the City of Cincinnati Bike Program:

Thank you for all you have done in the last few years to get more bike lanes installed. Thank you for helping us become more of a bike friendly city. With commuting up 146% in the last decade, your work is obviously appreciated by so many. Now that we have a Bike Share, even more people will be riding bikes in the city and we need more than just bike lanes. 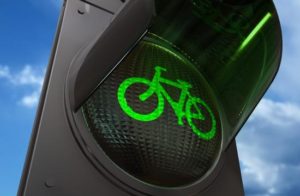 Ride safe out there ya’ll. It’ll keep getting better, I know it.