I got out for a long road ride today where I do my best thinking. I thought a lot about Interbike as I rode my familiar hills out in Kentucky. I think I am a little disappointed about what all we accomplished while in Vegas. 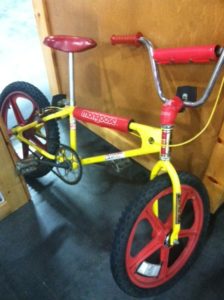 Interbike is the US industry bike show in Las Vegas. As I mentioned before, Dominic and I went out there three years ago and rode bikes and got married and experienced the show as normal bike dorks who didn’t own a shop and we had FUN.

This time around it was supposed to be business. I wanted to meet all of the account reps I had been speaking to on the phone for the last eight months. I also wanted to find some cool new products and sign up with some new accounts.

What I started to realize after day two at the dirt demo, was that not everyone in the industry attends Interbike. And by day three at the indoor demo, I realized a lot of the industry folks who’ve been in the business for years and years absolutely dread Interbike. By day four at the indoor demo, the sales reps were exhausted and you could tell they were sick of hearing themselves talk about their products. 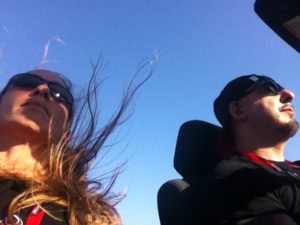 So, to start off there were lots of highs and lows.

The dirt demo day ONE HIGHS:
-Riding carbon fat bikes and not crashing.
-Meeting Brian Fornes of Raleigh, better known as Raleigh Sally the marketing guy.
-Driving around in that green Mustang convertible.
-The pool at the Luxor. 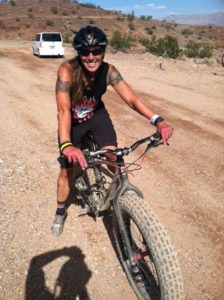 LOWS:
Too tired and not enough time to really ride a ton of bikes.

The dirt demo day TWO HIGHS:
-Riding the Surly Straggler (ohmigosh, I want that bike).
-Riding the new Haro 27.5 – smooth, handles well and takes a beating.
-The new white Mustang convertible.
-The pool at the Luxor 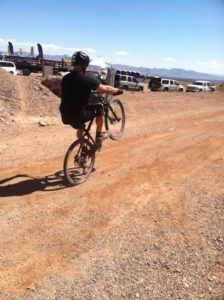 LOWS:
-Dominics crash off a 4 foot boulder that landed him with a blown up knee cap.
-Lost my business debit card. Yes, this happened.
-The green Mustang broke down and we were stranded on the side of the highway for 2 hours.

Tuesday night we had dinner with our Raleigh rep, Sean, along with our web designer, Gnome, and his travel partner Ryan. This was probably one of the best highlights of our trip. We don’t get to see Gnome often since he lives in AZ but he’s like a brother to me and our dinner lasted 3+ hours.

Wen – Day ONE of the Indoor demo. Lots of shiny stuff everywhere. And I mean EVERYWHERE. The venue was different this year and the set up wasn’t as good. We spent a lot of time in the “Urban/BMX/MTB” area. We looked for the old BMX pro’s that were at the show 3 years ago only to find they weren’t there. Dominic was bummed. He did get to see a few old riding buddies who still ride and that got him stoked. 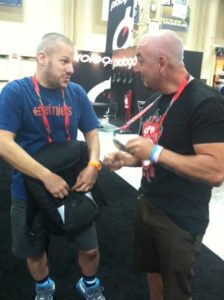 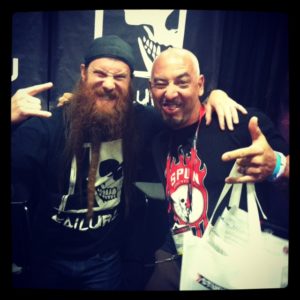 We ventured to the area called The Paddock where we could ride road bikes if we wanted, instead we got some food and ended up sharing a table with a MOOTS frame builder. He was OVER Interbike. We told him about our shop and tried to keep the conversation positive, but this guy was ready to go HOME. It was still cool to talk to them.

Wen night – CX Vegas! We had tickets to the race and passes to the VIP area at the Raleigh booth which was awesome. We arrived just in time for the elite women, and the crowd was getting rowdy. 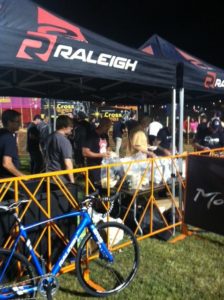 I met an online friend who I had known via my old blogging days, who also happens to be an editor at Bicycling Magazine. Leah and I made that connection like we had known each other forever. It was cool to see and talk to her. She manages the Instagram account for Bicycling Magazine and is interested in posting about Spun Bicycles – really cool. 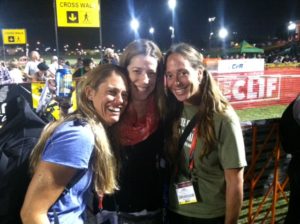 Once the elite women were finishing and the pro men were lining up, we were ready to go. I don’t do well in large drunk crowds.

Thur morning – I participated in the Interbike Ride for Reading Book Delivery via BICYCLE! I left Dominic to sleep in (and play slots) and went to the meet up for this event. Pivot provided the bikes. Better World Books donated 3000 books. We delivered them to 200+ screaming kids and I gotta tell you, I teared up when we arrived. It was really awesome. I learned so much from this event and when Spun Bicycles and Wordplay team up for our 2014 RFR event, it will be BIGGER and BETTER. 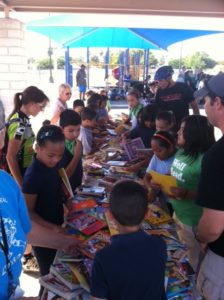 After the RFR event, we headed to the Indoor demo where we made a beeline for the Fyxation booth and put in an order with Ben. I opened an account with Fyxation on the advice of Brad Q. of Urban Velo back in January. We never did order anything though. I felt bad when I saw Ben and thanked him for his patience. Once Dominic got to see their bikes and products he was down with me to order a bunch of stuff. They had some nice pedal/strap combo’s, the leather beer and wine holders, bar ends, and bar tape. Oh and their bikes – we ordered The Eastside for the shop. It is exquisite. 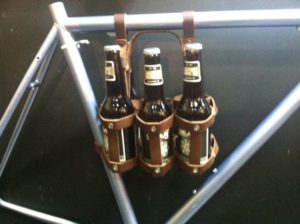 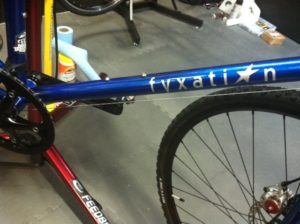 Also, look for Failure completes at the shop soon. 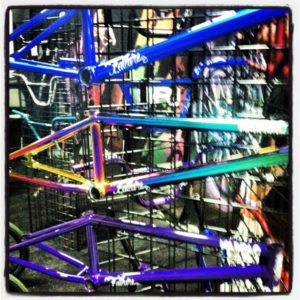 Thur afternoon we were both exhausted and headed to the pool to relax. Then we took the Mustang out to Old Vegas where we got married – reminisced about our day – and headed back to the show for the USA Criterium races. 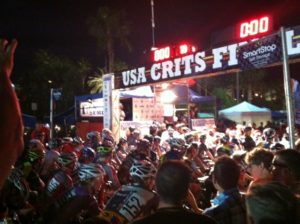 Once again we found ourselves in a VIP tent for Bicycling Magazine, chatting with Leah and her colleges and munching down on some food. After a while, we headed out, and walked back to the hotel with our Raleigh rep, Sean.

We couldn’t wait to fly home on Friday and pick up our dogs.

There is no need to go back to Interbike for a long time. I can find the accounts we need for the shop by word of mouth just as I have been doing the last 8-9 months.

We were very happy to be back in the shop on Saturday, seeing our friends and customers and doing what we enjoy, which is working at Spun Bicycles.