Saturday we had some gorgeous weather. I snapped this picture right before we closed up, so stoked on blue skies and sunshine.

After work, I went home, to Westwood, and took my dogs out for a long walk. We took our usual route down Wardell. We came around the corner from Boudinot to Harrison ave and saw the flashing lights. I kept walking towards the police cars and as I got closer I saw the yellow tape. They had the street taped off. As I approached the scene a cop told me I would have to turn around. It was then that I noticed they had the sidewalk taped off too. There was a car in the road all smashed up. I saw a few people standing outside the barber shop and asked one of the ladies what happened. She said a kid was playing around and darted out into the street. She was one of the witnesses the police were interviewing. She told me the injuries were “really bad” and just shook her head. I turned around and took the dogs home a different route. WLWT reports about the accident here.

EDIT: The boy who was hit on Harrison ave has passed away. My deepest condolences to the family.

Later that night after dinner Dominic and I were sitting on the couch and a message from a customer/friend/neighbor popped up on my phone.

Immediately we messaged him back, “OMG WHERE? ARE YOU OK? Is someone with you?”

Our customer did not have severe injuries but this is his 2nd time getting hit by a car on his bike since he moved here about 6 years ago. His bike was totaled in the last accident too. Both of his crashes involved negligent drivers. The first accident involved a car that turned left into him at a green light. This time the driver who hit him didn’t look both ways at a stop sign and she admitted she was at fault.

As you can see we have two totally different accidents that occurred on Saturday.

I feel like I am beginning to sound like a broken record. I will never ever get used to hearing about customers and friends getting hit by cars on their bikes. The pile of insurance bikes in our basement continues to grow.

Hell, even before we had the bike shop I attended meetings at City Hall, and I am talking almost 10 years ago, tons of us showing up begging for bike lanes. This pic I found is captured from June of 2010 “City Hall Bike Lane Meeting!” 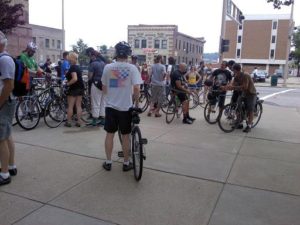 Pedestrian accidents are happening all over the city and I like the idea of educating our kids – LOOK BOTH WAYS BEFORE CROSSING, even if you are in a crosswalk. Without police patrol, cars drive however the fuck they want and if the light is yellow turning red, assume they’ll run it. I think about Sarah Cole a lot too. I think about her walking across the street (not in a crosswalk) *everyday* to grab coffee for her Tickle Pickle crew. I think about the day she was killed crossing the street with all those coffee drinks and I remember seeing the blood on the ground and all the spilled coffee. It fucking sucks.

A week ago I attended a Pedestrian Safety Committee meeting here in Northside and newer councilman Greg Landers was there. One lady talked about her kid getting hit by a car on his bike. Another woman talked about her neighbor walking her dog across Kirby, in a crosswalk, and her DOG GOT HIT AND KILLED (no data for that incident cuz ya know, it’s just a dog). I kept my mouth shut and just sat back and listened. Seems to be the same shit, different year and a few new elected council members. My main concern is my customers and my business but the city as a whole needs so much more to happen to really make the streets safe. I want to feel positive. I want to think that the city will do more to make our streets safe. Until then, I guess they’ll be collecting data and talking about it some more.

The pylon in front of our shop was replaced with a new pylon and I have requested that flashing lights get installed too. 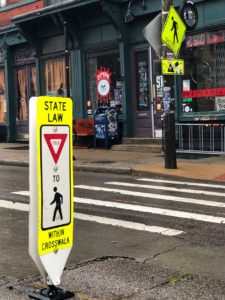 Thanks for reading and letting me rant. Feel free to share this post and email me with your thoughts.

Spun Bicycles is located in the historic Hoffner Lodge in Cincy’s Northside district.